It all started when I woke up asking my dad when we were going to be leaving for the Regatta in Henley that day.  We picked up his new tuxedo a couple days before for the event.  He informed me I could wear his old one that doesn’t fit him anymore.  The Regatta is a week long festival that revolves around the rowing competition on the Thames River.

I lifted my head and asked him to go on and reveal the old tuxedo so I may give it my approval and try it on just in case I needed a back up plan or needed to back out altogether.  I stayed awake for a whole two minutes while he brought in a garment bag unzipped the bag and said “This isn’t it” and promptly left to get another bag.  I rose again to hear him tell me from his room that it was nowhere to be found.  As I wasn’t quite awake yet those words had little effect on me.  I didn’t acknowledge that might have meant we were going to get creative.  Sure enough he got creative and started bringing in the substitute.  He said I had the tuxedo pants hanging in my wardrobe, he produced the tuxedo jacket, unwrapped the tuxedo shirt and chucked the tuxedo tie on the bed.  Still too weary to object to what he was doing I just sat there and thought, “Those pants aren’t even black!”.  No, actually I said that out loud.

What he was insisting I wear is some faded black Polo Chino’s (cotton), his black linen sport coat, his tuxedo shirt and his velvet blue bow-tie.  This conglomerate was to make up my evening attire for the Regatta.

My first instinct was to protest and think up some alternative but I realized without the old tuxedo that offer of mix-matched clothing was the next best thing. 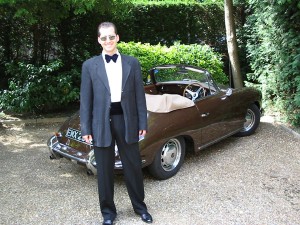 What I would usually do in a situation like this was not attend but I realized I don’t have a reputation in London to hurt and if my dad wanted me to go out in public looking like that is was O.K. with me. 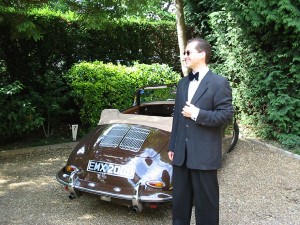 So we started the hour drive out of Wimbledon toward Henley. 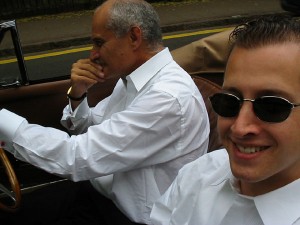 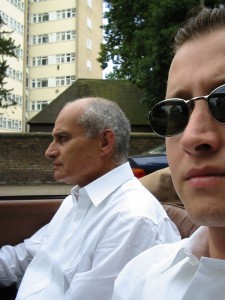 I suppose we wouldn’t have gone but we were meeting Barbara and a few of her friends and we had made these plans a couple weeks in advance.  At the end of the day we were able to enjoy the entire experience.  We got accomplished what we set out to do and dad did it in style.  As for me I got off easy because if you notice those pants I am wearing in the pictures above are actually black because after applying a bit of pressure on my end I was able to get a pair of Polo Gabardine’s out of Dad.  Although I couldn’t bring myself to wear the linen sport coat all night I pulled it off.

I learned a few things too.  I learned it is good to go when invited, always laugh and most importantly I learned what it feels like to be dressed like a step-child.

Barbara, Dad and I 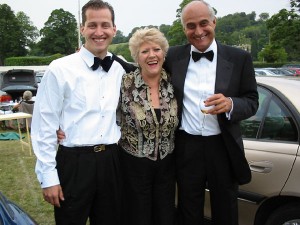 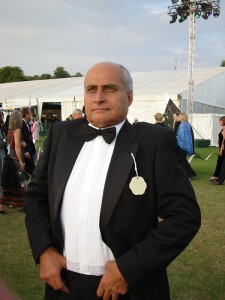 Sunset on the Thames 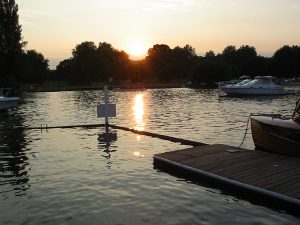